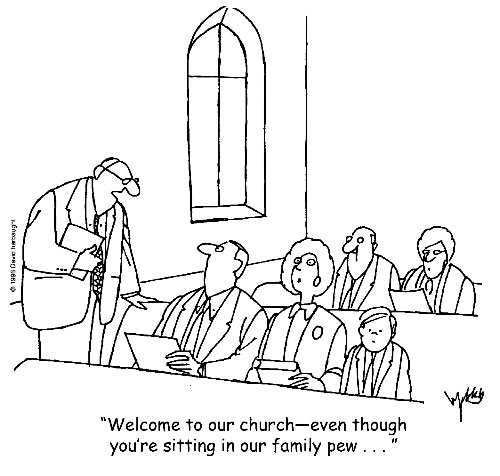 Things change.  We would like things to stay the same, but they don’t.  They really can’t.  We might recall with fondness the days when gas was…well, a lot less than it is.  Or we might reminisce about the days when everything was closed on Sundays and people would visit.  Some changes are good and some we quickly identify as bad.   In reality, telling the difference between good change and bad change is an art form that requires divine wisdom, discernment, courage, and usually a lot of hindsight.  Often, if we do not have the luxury to time travel or wait for hindsight to kick in, we prefer to just stay where we are.

In a congregation that I served, there was a senior couple that worshiped every Sunday, and I mean EVERY Sunday.  They were actually there more than the pastor.  I am not exaggerating.  They would come in at the same time every Sunday and sit in the same spot in the same pew.  The would follow the liturgy in the same way every Sunday.  They would have troubles if something deviated from the printed bulletin and would not remain for any special fellowships or healing services.  Their clock ticked precise timing.   Don’t misunderstand me, I knew them to be kind and loving people.  Their schedule permitted a certain amount of chatting and fellowship before worship.  They were always there quite early, so I never saw them lose their seat.  I suppose though, that they would be the type to simply sit at close as possible to their usual seat.

Change is not easy for us creatures of habit.  We like predictability in the face of an ocean of changes.  Sometimes, though, life demands that we change and change for the better.  A new normal becomes our way of living.  It is not bad or good, it is just new.  Since God is in the business of making all things new.  I wonder if it would help if we would stop trying to cling to old things and cling to the newness of God.

Peter and the early followers discovered that there were a lot of new rules and new things were happening all the time.  Even Gentiles (non-Jews) were part of the new normal.  Who could prevent welcoming them into the community and continuing in what God had started?  No one could come up with a reason to go against the newness of the Holy Spirit.

44 While Peter was still speaking, the Holy Spirit fell upon all who heard the word. 45The circumcised believers who had come with Peter were astounded that the gift of the Holy Spirit had been poured out even on the Gentiles, 46for they heard them speaking in tongues and extolling God. Then Peter said, 47‘Can anyone withhold the water for baptizing these people who have received the Holy Spirit just as we have?’ 48So he ordered them to be baptized in the name of Jesus Christ. Then they invited him to stay for several days.  Acts 10

Pray for those who lives are uncomfortable and requiring lots of changes.

Pray for those considering Baptism or newly Baptized, that they would continue to know the warmth and love of a new family of God.