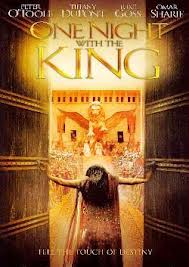 Below is the reading for today from Esther which is celebrated in the Jewish feast days of Purim. Purim means lots, referring to the lottery the evil Haman (boo hiss) used to determine when the massacre of the Jews was to occur.  Esther orchestrates a very crafty exposure of the plot and saves her people.  Read the whole book of Esther (only 10 chapters) for the whole story.  “One Night with the King” is also a very good movie version of the story.  I found this set of connections from www.jewfaq.org site:

Many have noted the echoes of Purim in the Nuremberg war crime trials. In the Book of Esther, Haman’s ten sons were hanged (Esther 9:13); in 1946, ten of Hitler’s top associates were put to death by hanging for their war crimes (including the crime of murdering 6 million Jews). An 11th associate of Hitler, Hermann Göring, committed suicide the night before the execution, a parallel to the suicide of Haman’s daughter recorded in the Talmud(Megillah 16a). There are rumors that Göring was a transvestite, making that an even more accurate parallel. One of the men seems to have been aware of the parallel: on the way to the gallows, Julius Streicher shouted “Purim Fest 1946!” See: The Execution of Nazi War Criminals. It is also interesting that, in the traditional text of the Megillah (Book of Esther), in the list of the names of Haman’s sons, the letters Tav in the first name, Shin in the seventh name and Zayin in the tenth name are written in smaller letters than the rest. The numerical value of Tav-Shin-Zayin is 707, and these ten men were hanged in the Jewish year 5707 (the thousands digit is routinely skipped when writing Jewish years; there are no numerals for thousands in Hebrew numbering). They were not hanged on Purim, though — they were hanged on Hoshanah Rabbah.

Another echo of Purim is found in the Soviet Union a few years later. In early 1953, Stalin was planning to deport most of the Jews in the Soviet Union to Siberia, but just before his plans came to fruition, he suffered a stroke and died a few days later. He suffered that stroke on the night of March 1, 1953: the night after Purim (note: Jewish days end at sunset; you will see March 1 on the calendar as Purim). The plan to deport Jews was not carried out. 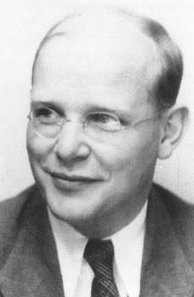 Bonhoeffer for our Congregation Council  meeting.  Yesterday was the day of his martyrdom at the hands of the Nazis.

Yet, in Christ, weakness has become powerful.  The witness of Dietrich has become a great testimony against evil.  Honestly, life wins so pervasively, I feel bad for the wicked and hope and pray that they might pick the right side and live.

Now in the twelfth month, which is the month of Adar, on the thirteenth day, when the king’s command and edict were about to be executed, on the very day when the enemies of the Jews hoped to gain power over them, but which had been changed to a day when the Jews would gain power over their foes, the Jews gathered in their cities throughout all the provinces of King Ahasuerus to lay hands on those who had sought their ruin; and no one could withstand them, because the fear of them had fallen upon all peoples. All the officials of the provinces, the satraps and the governors, and the royal officials were supporting the Jews, because the fear of Mordecai had fallen upon them. For Mordecai was powerful in the king’s house, and his fame spread throughout all the provinces as the man Mordecai grew more and more powerful. So the Jews struck down all their enemies with the sword, slaughtering, and destroying them, and did as they pleased to those who hated them. But the Jews who were in Susa gathered on the thirteenth day and on the fourteenth, and rested on the fifteenth day, making that a day of feasting and gladness. Therefore the Jews of the villages, who live in the open towns, hold the fourteenth day of the month of Adar as a day for gladness and feasting, a holiday on which they send gifts of food to one another.

Mordecai recorded these things, and sent letters to all the Jews who were in all the provinces of King Ahasuerus, both near and far, enjoining them that they should keep the fourteenth day of the month Adar and also the fifteenth day of the same month, year by year, as the days on which the Jews gained relief from their enemies, and as the month that had been turned for them from sorrow into gladness and from mourning into a holiday; that they should make them days of feasting and gladness, days for sending gifts of food to one another and presents to the poor. So the Jews adopted as a custom what they had begun to do, as Mordecai had written to them.

“I tell you, my friends, do not fear those who kill the body, and after that can do nothing more. But I will warn you whom to fear: fear him who, after he has killed, has authority to cast into hell. Yes, I tell you, fear him! Are not five sparrows sold for two pennies? Yet not one of them is forgotten in God’s sight. But even the hairs of your head are all counted. Do not be afraid; you are of more value than many sparrows.“And I tell you, everyone who acknowledges me before others, the Son of Man also will acknowledge before the angels of God; but whoever denies me before others will be denied before the angels of God. And everyone who speaks a word against the Son of Man will be forgiven; but whoever blasphemes against the Holy Spirit will not be forgiven. When they bring you before the synagogues, the rulers, and the authorities, do not worry about how you are to defend yourselves or what you are to say; for the Holy Spirit will teach you at that very hour what you ought to say.